By Nick Zaryzcki, Fact-Checked by Janet Berry-Johnson, CPA on December 14, 2022
This article is Tax Professional approved

S corporation status is a tax designation granted by the IRS that lets corporations pass their income through to their shareholders. (You might also sometimes hear S corporations referred to as "Subchapter S corporation," “Small Business Corporation" or simply “S corp.)

Will filing for S corp status result in a lower tax bill for your corporation? Or should you remain a regular corporation? And how exactly does reporting the profits or losses of an S corp on your personal tax return work?

Here’s what you need to know.

How are S corps taxed?

S corps don’t pay federal corporate income taxes, so there is not really an “S corp tax rate” (although they may get taxed at the state level). Instead, the company’s individual shareholders split up the income (or losses) amongst each other and report it on their own personal tax returns.

Double taxation refers to how income earned by a regular corporation is technically taxed twice: once when the corporation earns income, and again when it distributes dividends to its owners (who then pay taxes on those dividends).

S corps avoid this business tax by passing their income through to their business owners directly as reported on a Schedule K-1 (this is why they’re sometimes referred to as “pass-through” entities).

How do I elect S corp tax status?

To file (or ‘elect’) for S corp status, your business must first be incorporated as a regular C corporation or have filed for LLC status. (Remember: S corp status is a tax designation—you can’t ‘incorporate’ as an S corp.)

If you’re electing S corp status as a C corporation, you must submit Form 2553, Election by a Small Business Corporation to the IRS, signed by all of your company’s shareholders.

If you’re electing S corp status as an LLC, you’ll need to file Form 2553, Election by a Small Business Corporation.

Get a detailed breakdown of how to elect for S corp status with the IRS.

How do I file my taxes as an S corp?

Form 1120S, U.S. Income Tax Return for an S Corporation is the tax form S corporations (and LLCs filing as S corps) use to file their federal income tax return.

1120S is a five page form from the IRS, which looks like this: 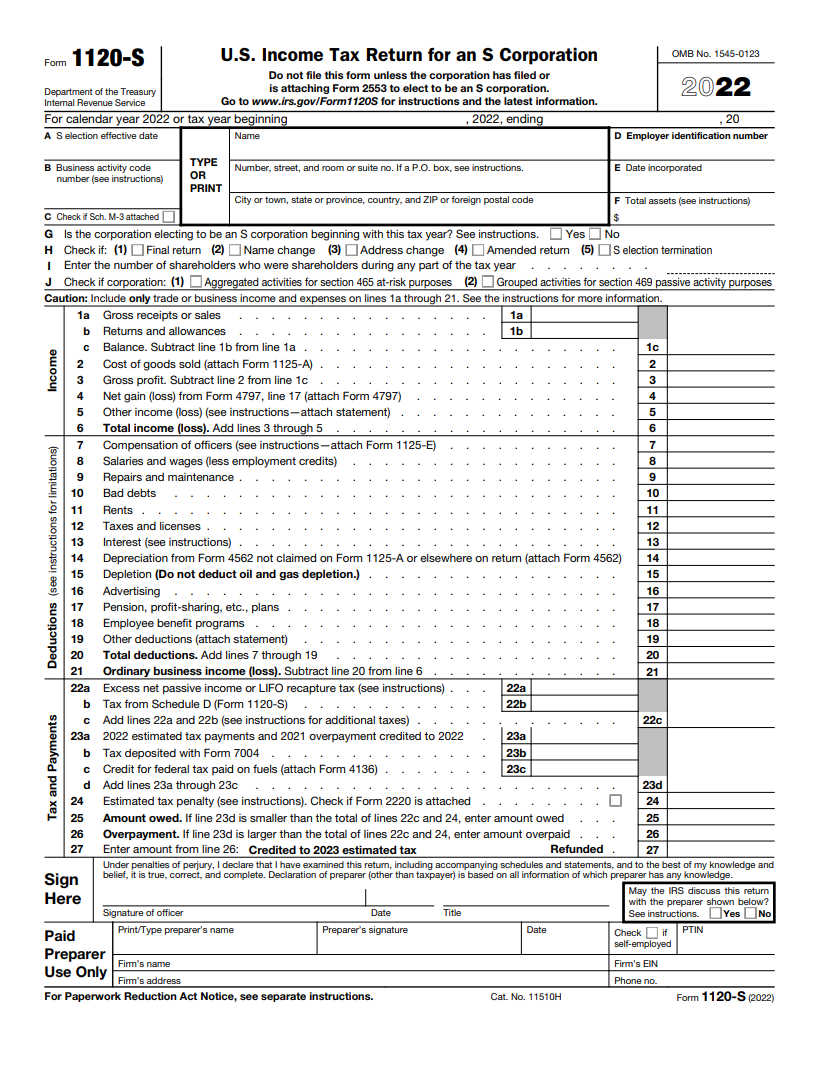 You’ll need the following information on hand before filling out 1120S:

Page one of 1120S is divided into four parts:

There are also six schedules attached to 1120S, the first three of which are mandatory:

Schedule B, “Other Information,” will ask you a series of yes or no questions about your business’ accounting methods, the types of stock it owns, gross receipts, and a bunch of other stuff.

Your answers to Parts a) and b) of Question 11 are particularly important here—if you answer “yes” to both, you won’t have to fill out Schedules L and M-1 of Form 1120S.

Schedule D is where you’ll report any capital gains or losses your S corporation sustained this year (i.e. money it made buying or selling stocks, bonds and other assets).

Schedule K brings together information about your business’ income, deductions, and any tax credits your business qualifies for. You’ll use the information you bring together on this schedule to file a separate Schedule K-1 for each shareholder in your S corp, based on the percentage of total shares they own.

There are also three optional schedules attached to 1120S:

Schedule M-1 is where you’ll report any discrepancies between the profits (or losses) you reported in your books, and the profits you reported on your taxes (due to depreciation or any tax-exempt interest you earned, for example).

Schedule M-2 is where you’ll report changes in your company’s retained earnings, i.e. any profits you held back to reinvest in the business.

Further reading: What is Form 1120S, and How Do You File It?

When is the deadline for filing my S corp’s taxes?

The deadline for filing Form 1120S is March 15, 2023. You can also apply for a six month extension by filing Form 7004. You can file both forms electronically or by mail.

What are the tax benefits of filing as an S corp?

As we mentioned above, regular corporations are taxed at the corporate and personal level, while S corporation income is only taxed at the personal level. If your company is making a profit and you want to take some of those profits out of the company, it’s generally cheaper to do so as an S corp.

Unlike owners of sole proprietorships, partnerships and LLCs, S corp owners only pay self-employment taxes on their wages rather than their entire share of the company’s profits. All other income is paid to shareholders in the form of “distributions” that are not subject to self-employment tax, which makes S corporation status very attractive to many small businesses.

For example, let’s say you have a 50% ownership stake in Carl’s Sandwiches, a successful chain of sandwich shops that recently filed for S corporation status with the IRS.

But there’s a catch

You may wonder why S corp owners don’t just take a salary of $0 to avoid self-employment taxes altogether.

The catch here is that if you’re a shareholder and an employee of the company, which most small business shareholders are, you must pay yourself a “reasonable salary” before paying yourself a tax-free distribution.

What exactly is a reasonable salary? The IRS has no hard and fast rules for this one. But you should try to base it on position, experience, business size and what a comparable position at another company in your industry would earn. Whatever salary you decide on, be sure you’re able to justify it to the IRS if you ever get audited.

Chat with a CPA or tax professional to make sure you’re aware of your state’s S corporation rules.

So should I elect S corp status?

Generally speaking, this decision should come down to whether or not you plan on taking profits out of your business or reinvesting them back into your business.

Filing as an S corporation can lower your tax bill if you (or any other owner) plan on taking profits out of the company in the form of distributions.

If you’re a new and growing business and intend to reinvest most of your profits back into the business, on the other hand, sticking to C corporation status can leave you with a lower tax bill.

For more on whether C corp or S corp status is right for you business, check out our breakdown of S corps vs C corps. And if you’ve decided to become an S corp, we’ve got a guide to the forms you need to fill out.

And as always, you shouldn’t make any drastic tax move like this before consulting a CPA, tax attorney or other expert that has expertise in tax planning. They’ll be able to tell you definitively whether S corp status is right for your particular business situation.

And if you want someone else to take care of the bookkeeping and tax filing for your S corp, check out Bench. We’ll take everything off your plate, for good.