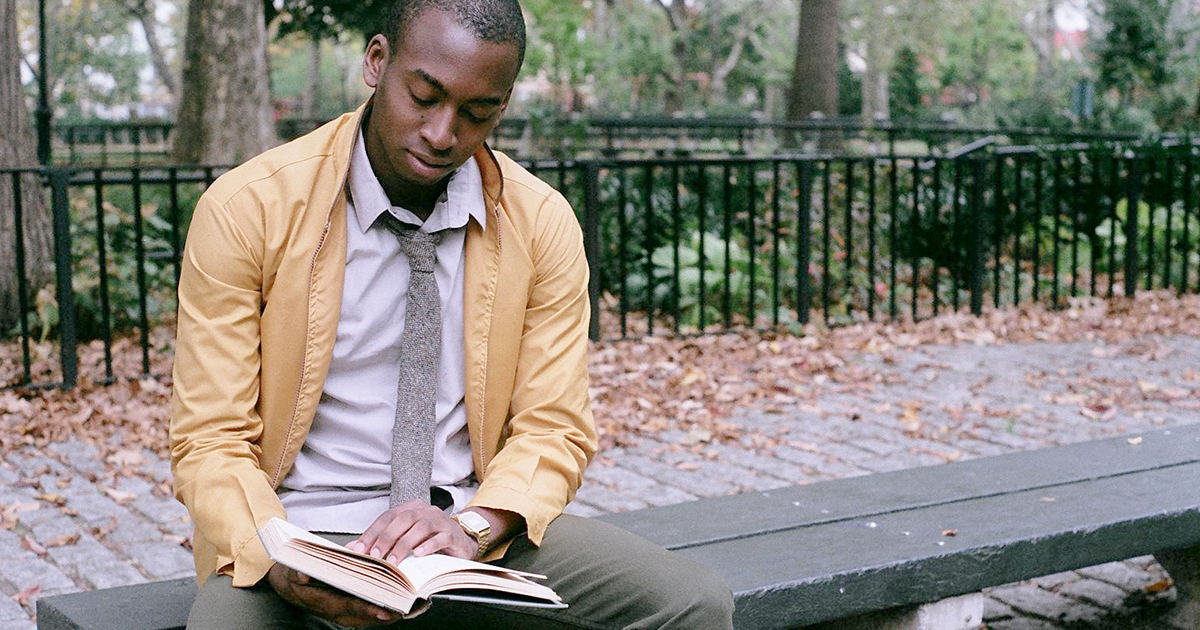 In 2012, Joshua Adam Brueckner was down on his luck. Unemployed and facing a mounting pile of bills, he needed a job—fast. Only, Joshua was so broke he couldn’t afford to buy clothes for job interviews.

“I was in a seriously bad position,” he says. “My ex moved out and stuck me with the rent, I was unemployed, and I wasn’t having any success on the job front. And I applied for everything, even unpaid internships hoping they would lead to a paid position. I felt useless.”

Emotionally crushed and at the point where many would have given up, Joshua persevered. He taught himself how to tailor, and set about modernizing oversized thrift-store garb into fashionable interview wear. Although he tailored all kinds of menswear, Joshua’s knack for slimming his ties into fashionable versions of their former, fatter selves stood out – so much so that others took note. Soon Joshua was fielding requests from others asking if he could do the same for their ties, too.

The day he took his first paid order was the pivotal moment when dire need and entrepreneurial ingenuity collided, and SkinnyFatties (pronounced Skinny-Fat-Ties) – the world’s first (and currently, only) online tie-sliming service – was born.

For a fraction of the cost of buying a new tie, customers could send SkinnyFatties their old, fat ties to be slimmed. Three years in, demand for the service continues to grow, celebrity clients have come knocking, and the company has received a staggering amount of attention from the press. All this from a painfully simple business model: No lengthening. No shortening. No dry cleaning. Just slimming.

At a glance it’s the kind of trajectory that could easily be mistaken for an “overnight success.” But the story of SkinnyFatties is one of grit, hustle, and sheer determination.

The perfect width for a tie depends on where it will be worn (at the office, at a formal event, to brunch), what it will be worn with (a blazer, three piece suit, a simple collared shirt), and the height and body shape of whoever’s wearing it.

But retailers and brands produce ties in a one-size-fits-all fashion. If what you buy from the rack works, you’re in luck. If you need to have it tailored, your options are limited to local tailors who are unlikely to specialize in matching the perfect tailored tie to your unique shape and style.

Similar to tailoring a suit, tie slimming is likely one of those services you don’t think you need until you see how good the end result looks on someone else. Indeed, Joshua’s first paid order for tie slimming came from someone he met through Airbnb.

“I used to Airbnb a room in my apartment, and my first customer was my first ever Airbnb guest. He saw one of my ties and bought it. He even went to the trouble of connecting me with his former coworkers at Gilt City where we ran a successful three-month SkinnyFatties promotion.”

In due course, this early exposure would lead to a write-up in DETAILS Magazine and a glowing mention in Time Out New York. But first Joshua needed more sales, so he did what few would do: he set up a stall in Brooklyn and sold ties on the side of the street.

Passers by were interested in the product but, just as before, Joshua got more interest from people who wanted their existing ties slimmed rather than from customers who wanted to purchase new neckwear.

He listened intently to the feedback and launched a website to test the service. Word-of-mouth support from fashionable Brooklynites and SkinnyFatties’ popular Instagram account (@AirTaylor) helped to foster early growth for Joshua’s service. Eventually local press caught wind of his story, and in just a few short months the trickle of orders turned into a steady flow.

While he initially expected “young, hipster guys” to be the company’s main demographic, luxury-oriented customers have emerged as the most consistent driver for new orders and repeat business. SkinnyFatties clientele are generally between 30 and 60 years old, and they commonly request slimming for ties from luxury brands such as Hermes and Louis Vuitton that cost between $100 and $500.

Joshua openly admits that SkinnyFatties has attracted the attention of a growing list of celebrity clients, although he politely declined to name names (“I actually signed non-disclosure agreements.”).

“I used to think tie slimming wasn’t something rich and famous people wanted until I received my first order from one. I realized that it’s not about the monetary value of ties, but the sentimental value.”

Reading through online reviews of the service, a common thread emerges; people are enamoured with the fact that they get to keep their existing, beloved ties.

Much like a new parent cossets their firstborn child, Joshua bolsters this high level of customer infatuation by keeping a watchful eye on product quality and customer service. Every slimmed tie is hand-stitched and subject to vigorous quality control. Every customer response involves a thoughtful reply. Every live chat message on the SkinnyFatties website is answered by Joshua himself.

“We place a heavy focus on detail, making sure our customers are completely in love with the results.”

At 27-years-old, and with SkinnyFatties his first business, milestones like moving into an office and hiring new employees are as thrilling for Joshua as they are daunting.

He admits to falling into the “I’ll just do it all myself” trap, a pitfall common to entrepreneurs, especially during the nascent stage of a business where survive at all costs is the overarching objective.

“The toughest decision I’ve made so far was hiring my first tailor. When you reach that point of trying to manage sales, customer service, web design/development, PR, finances, and business development, all on top of the service you are offering, you really have to strategically outsource or you will go mad.”

The extra set of hands has allowed for a doubling in service. To date, the SkinnyFatties team has slimmed over 4,000 ties for 800 customers in 12 different countries. This equates to the company having saved customers from buying $400,000 in new neckwear.

Having an employee has also allowed Joshua to dedicate greater focus to an area where his true talents lie: hustle.

To say that SkinnyFatties is a magnet for press coverage is an understatement. SkinnyFatties has been featured in Details Magazine, ABC News, E! Entertainment, Business Insider, Men’s Journal, Gear Patrol, Teen Vogue, CNET, and countless blogs. At the time of writing he was pitching to appear on Shark Tank.

Sure, the unique nature of the business and the way it all began is easy for outlets to spin into an entertaining yarn, but the attention received is a testament to the quality of the service (there are over 180 five-star reviews on the SkinnyFatties website) and Joshua’s willingness to fervently peddle his story.

And although media exposure has been a part of SkinnyFatties’ marketing strategy from the very beginning, Joshua says that in the early days press coverage was less about revenue than it was for personal validation.

“When I first launched I reached out to the press myself with a nice short message asking them to check out my business. Everyone ignored me. I remember when I got my first positive response. It didn’t really increase sales for the business as much as it increased my sense of personal validation. Getting attention from the press made me more confident that what I was doing had a lot of potential.”

Joshua also achieved moderate success in crowdfunding startup funds for the business ($2,560 on Indiegogo and over $7,000 on Pave). His advice for other entrepreneurs who are thinking of going down the crowdfunding route: “Start early. Crowdfunding is another full-time job and you need to develop a marketing strategy before – not after – your campaign begins. Also, be sure to notify the press before your campaign launches.”

But the best part about the growth of the business is that the situation which sparked SkinnyFatties – Joshua finding himself destitute, at rock bottom – has come full circle. A portion of every SkinnyFatties sale is donated to CareerGear, a non-profit organization that provides professional clothing, mentoring, and life-skills to help low-income men find employment and become stronger contributors to their families.

“Looking back at my life to just a few years ago, where I was unemployed and struggling to find work, I felt personally compelled to help. We definitely believe that it’s our responsibility as a company to tie ourselves with a good cause.”

Is he lucky to have stumbled upon a lucrative niche, one that remains free of serious competitors? Absolutely. But entrepreneurs are well versed in creating their own luck. And on his way to crafting a reputation in the neckwear niche, Joshua unwittingly defined - and redefined - the neckwear market.

Should the ever-changing tastes of the fashion industry imperil the business, Joshua has the chops to pivot and serve a sudden shift in neckwear trends (tailoring skinny ties to become fat ties, perhaps?). And should competitors emerge to take him on, he’s ensured that SkinnyFatties is near unbeatable, miles ahead of the pack with a sophisticated brand, online service, and global following that’s showing no signs of slowing down.