By Nick Zarzycki — Reviewed by Janet Berry-Johnson, CPA on March 5, 2020

“Things fall apart”, to quote the poet W.B. Yeats. Some things apart faster than others.

As buildings, tools and equipment wear out over time, they depreciate in value. Being able to calculate depreciation is crucial for writing off the cost of expensive purchases, and for doing your taxes properly.

Here we’ll go over the most popular method of calculating depreciation for a small business: the straight-line method. We’ll show you how to calculate it, how it’s different from other methods, and why it’s so popular.

What is straight-line depreciation?

Straight-line depreciation is a simple method for calculating how much a particular fixed asset depreciates (loses value) over time.

If you visualize straight-line depreciation, it would look like this: 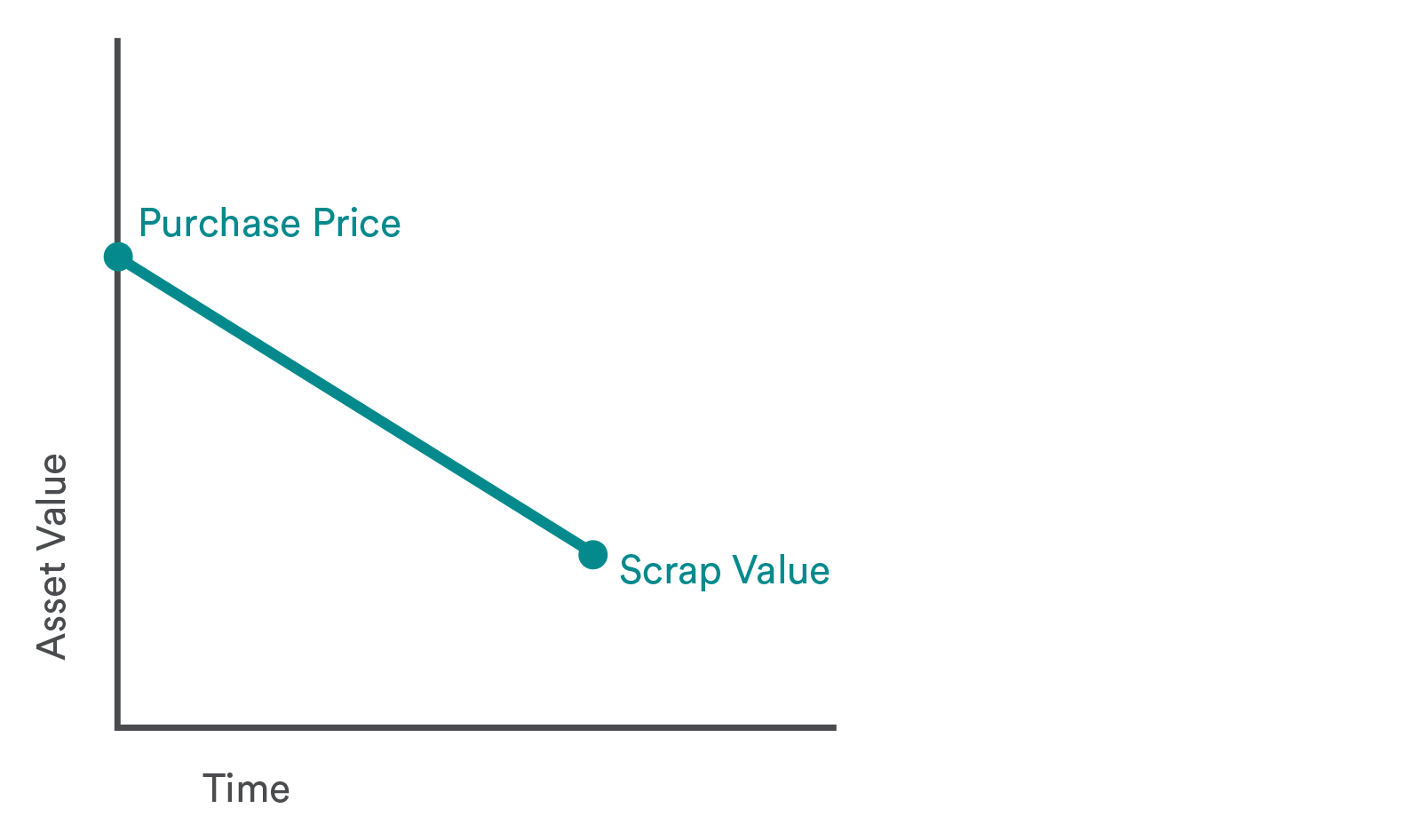 This is where the “straight line” in “straight-line depreciation” comes from.

How to calculate straight-line depreciation

You need three numbers to calculate straight-line depreciation for a fixed asset:

To calculate the straight-line depreciation rate for your asset, simply subtract the salvage value from the asset cost to get total depreciation, then divide that by useful life to get annual depreciation:

A note on useful life: if you’re calculating the amount of depreciation for tax purposes, the useful life figure should come from the IRS, which has sorted most depreciable assets into one of seven "property classes." (Property that depreciates over three, five, seven, 10, 15, 20 and 25 years, respectively.)

Let’s say your business buys a $2,000 MacBook that won’t be useful after five years, and that its estimated salvage value—how much you think you can sell it for in five years—is $500. (Five years is the period over which the IRS says you have to depreciate computers.)

To determine straight-line depreciation for the MacBook, you have to calculate the following:

According to straight-line depreciation, your MacBook will depreciate $300 every year.

How is straight-line depreciation different from other methods?

Things wear out at different rates, which calls for different methods of depreciation, like the double declining balance method, the sum of years method, or the unit-of-production method.

Compared to the other three methods, straight line depreciation is by far the simplest.

Look at how much the MacBook in the example above depreciates every year, according to straight-line depreciation:

Now let’s look at how much that same MacBook would depreciate under the double declining balance and the sum of years methods:

Notice how both of these methods apply more depreciation at the start of the life of an asset than at the end of it. This can be useful and more accurate. (Most tangible assets like computers, vehicles and machinery tend to lose a majority of their value in the first few years of use.)

The unit-of-production method is similar to straight-line depreciation, except for one thing: instead of measuring depreciation using dollars, it measures it in units of production instead.

Units of production can be anything: the number of labels printed by a label printing machine, number of miles travelled by a vehicle, or the number of kilowatt hours produced by a power plant.

Plug those figures into the following equation to get the total depreciation of your asset, measured in number of units:

annual depreciation in # of units =

When should I use the straight-line method?

To deduct certain expenses on your financial statements

Depreciation is an expense, just like any other business write-off. So you’ll want to make sure you calculate depreciation properly.

Most businesses use straight-line depreciation for their books, although some use the double declining or sum of years method, because it results in more write-offs near the beginning of the life on an asset.

For tax purposes, the IRS has a very specific depreciation method called the Modified Accelerated Cost Recovery System, or MACRS. In some cases, the IRS might even let you deduct the full cost of certain assets (like computers. software, and office furniture) during its first year of use, which gets rid of the need for depreciation methods altogether. (Accountants call this a Section 179 deduction.)

But the IRS uses the accelerated/MACRS or Section 179 for certain assets, including intangible assets like copyrights, patents and trademarks. Instead, you use amortization for those.

Check out our guide to Form 4562 for more information on calculating depreciation and amortization for tax purposes.

To figure out the value of your business

You can’t get a good grasp of the total value of your assets unless you figure out how much they’ve depreciated. This is especially important for businesses that own a lot of expensive, long-term assets that have long useful lives.

Whether you’re creating a balance sheet to see how your business stands or an income statement to see whether it’s turning a profit, you need to calculate depreciation. The straight-line method is a great way to do that quickly.

How does straight-line depreciation factor into my accounting?

In this case, you’d make the following entry in your books:

You would also credit a special kind of asset account called an accumulated depreciation account. These accounts have credit balance (when an asset has a credit balance, it’s like it has a ‘negative’ balance) meaning that they decrease the value of your assets as they increase.