With the double declining balance method, you depreciate less and less of an asset’s value over time. That means you get the biggest tax write-offs in the years right after you’ve purchased vehicles, equipment, tools, real estate, or anything else your business needs to run.

If you’re brand new to the concept, open another tab and check out our complete guide to depreciation. Then come back here—you’ll have the background knowledge you need to learn about double declining balance. 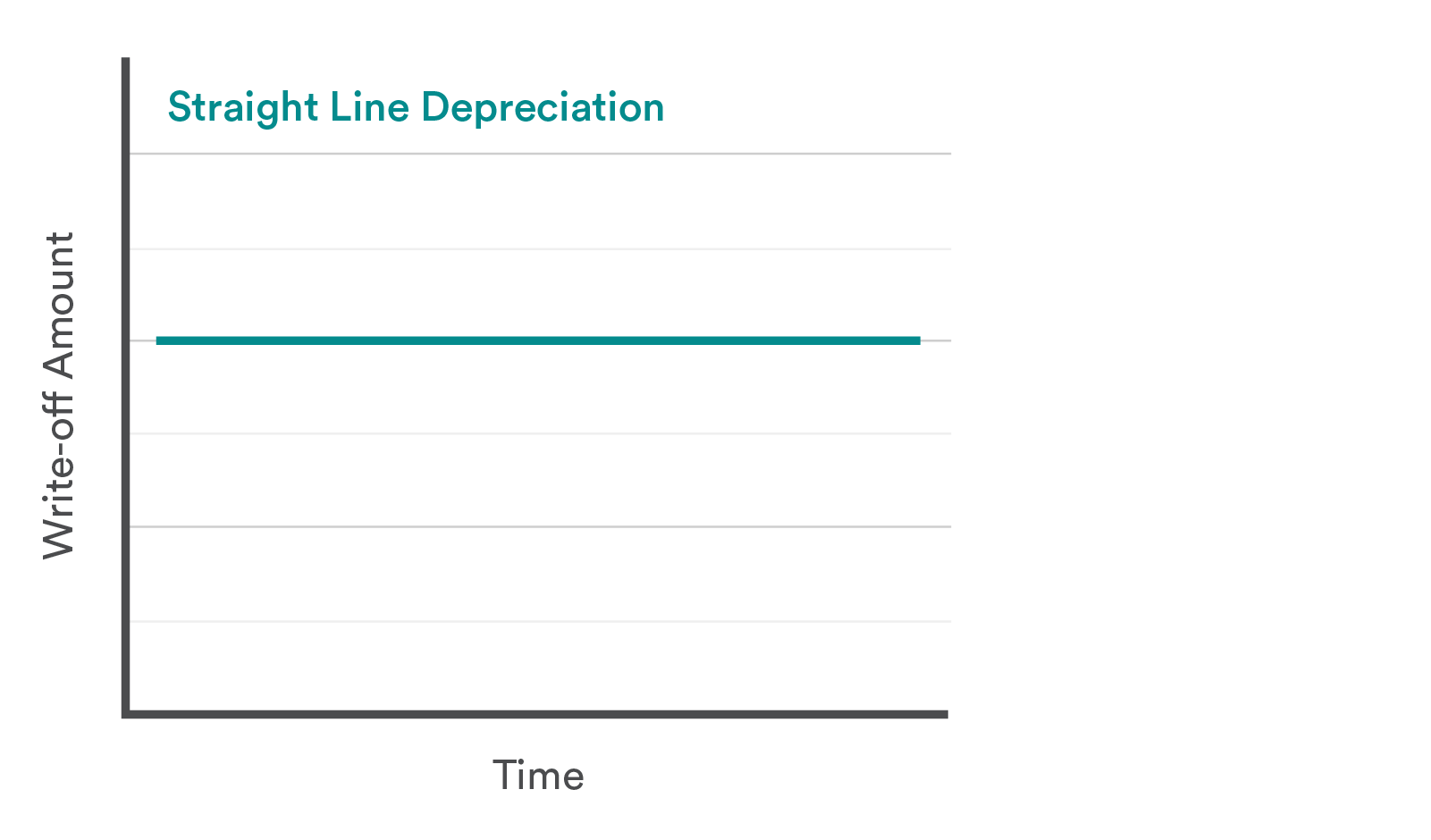 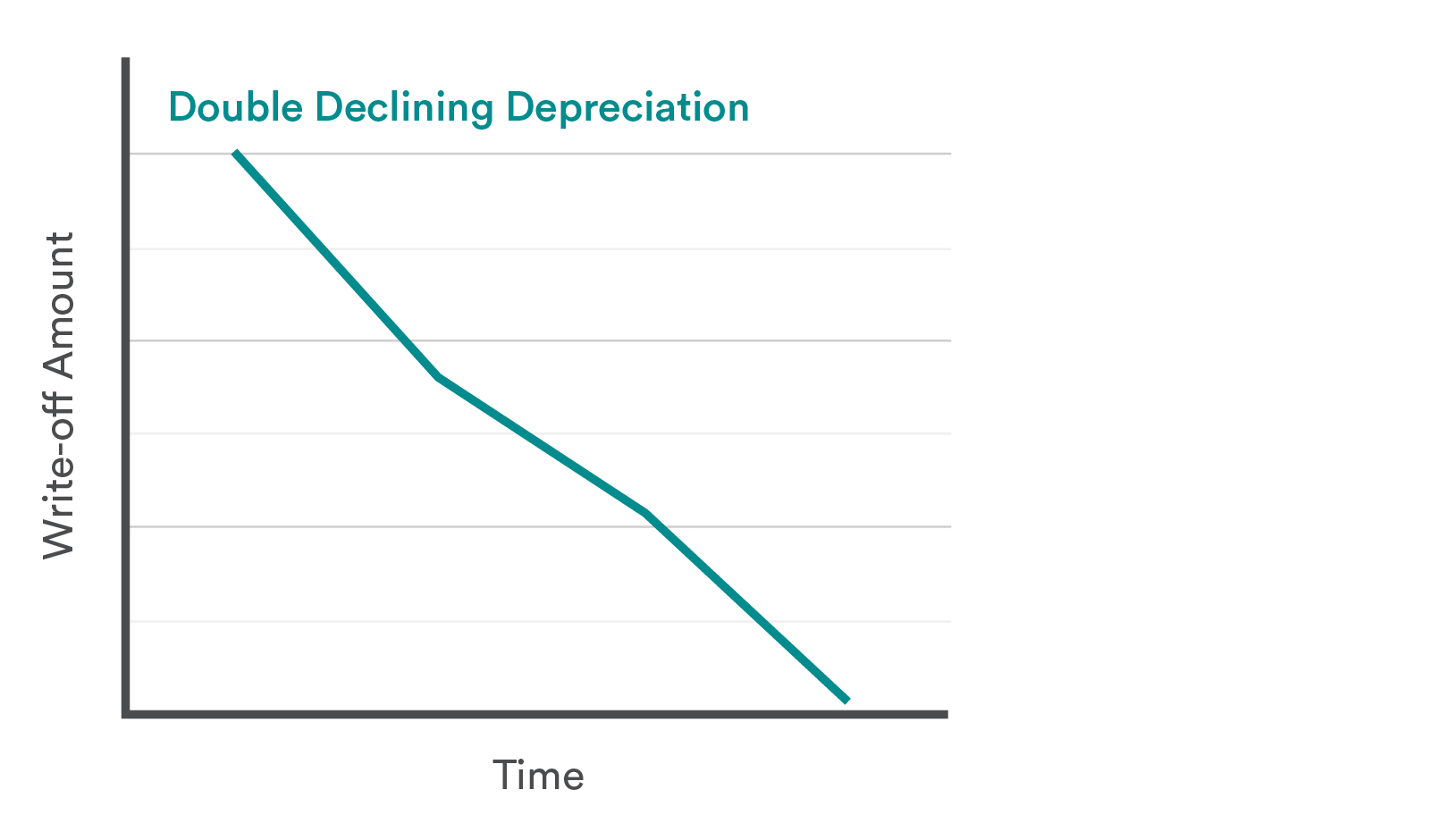 Your basic depreciation rate is the rate at which an asset depreciates using the straight line method.

To get that, first calculate:

Cost of the asset / recovery period

Cost of the asset is what you paid for an asset. Recovery period, or the useful life of the asset, is the period over which you’re depreciating it, in years.

Once you’ve done this, you’ll have your basic yearly write-off. You can use this to get your basic depreciation rate.

Every year you write off part of a depreciable asset using double declining balance, you subtract the amount you wrote off from the asset’s book value on your balance sheet. Starting off, your book value will be the cost of the asset—what you paid for the asset.

That number goes down each year, as you subtract the amount you wrote off.

When accountants use double declining appreciation, they track the accumulated depreciation—the total amount they’ve already appreciated—in their books, right beneath where the value of the asset is listed. If you’re calculating your own depreciation, you may want to do something similar, and include it as a note on your balance sheet.

Confused yet? Don’t worry—these formulas are a lot easier to understand with a step-by-step example.

The benefits of double declining balance

There are a few benefits to the double depreciation method.

You can match maintenance costs

Some depreciable assets—vehicles, for instance—work smoothly when you first buy them, but require more maintenance over time. Luckily, that maintenance is tax-deductible. Double declining depreciation lets you get a bigger tax write-off in the earlier years, when you aren’t writing off maintenance costs.

In later years, as maintenance becomes more regular, you’ll be writing off less of the value of the asset—while writing off more in the form of maintenance. So your annual write-offs are more stable over time, which makes income easier to predict.

You can cover more of the purchase cost upfront

You get more money back in tax write-offs early on, which can help offset the cost of buying an asset. If you’ve taken out a loan or a line of credit, that could mean paying off a larger chunk of the debt earlier—reducing the amount you pay interest on for each period.

You can reduce your tax obligation when it counts

Some assets make you more money right after you buy them. (An example might be an apple tree that produces fewer and fewer apples as the years go by.) Naturally, you have to pay taxes on that income. But you can reduce that tax obligation by writing off more of the asset early on. As years go by and you deduct less of the asset’s value, you’ll also be making less income from the asset—so the two balance out.

The drawbacks of double declining depreciation

Like anything else, double declining balance has its downsides.

You’ll have to do more math, or get an accountant’s help

Bottom line—calculating depreciation with the double declining balance method is more complicated than using straight line depreciation. And if it’s your first time filing with this method, you may want to talk to an accountant to make sure you don’t make any costly mistakes.

Your income may become harder to predict

If you file estimated quarterly taxes, you’re required to predict your income each year. Since the double declining balance method has you writing off a different amount each year, you may find yourself crunching more numbers to get the right amount. You’ll also need to take into account how each year’s depreciation affects your cash flow.

If something unforeseen happens down the line—a slow year, a sudden increase in expenses—you may wish you’d stuck to good old straight line depreciation. While double declining balance has its money-up-front appeal, that means your tax bill goes up in the future. That can be tough if the extra money is sorely needed.

So, you just bought a new ice cream truck for your business. Congratulations! Now you’re going to write it off your taxes using the double depreciation balance method.

The truck cost $30,000. Under IRS rules, vehicles are depreciated over a 5 year recovery period.

Figure out the basic yearly write-off for the truck.

Figure out the straight-line rate of depreciation for the truck.

Calculate the book value of the truck.

(Each year, you subtract the amount you depreciated over previous years from the book value. This is our first year of depreciating this asset, though, so it won’t change.)

Remember to do this step every year.

Enter the straight line depreciation rate in the double declining depreciation formula, along with the book value for this year.

In the first year of service, you’ll write $12,000 off the value of your ice cream truck. It will appear as a depreciation expense on your yearly income statement.

Remember—you need to recalculate the book value every year. So you might as well make a note now:

Next year when you do your calculations, the book value of the ice cream truck will be $18,000.

To create a depreciation schedule, plot out the depreciation amount each year for the entire recovery period of an asset.

1- You can’t use double declining depreciation the full length of an asset’s useful life. Why? Since it always charges a percentage on the base value, there will always be leftovers.

2- Eventually, you’ll have to switch from double declining depreciation to the straight line method. It’s the only way to make sure you depreciated the entire value of an asset—or “drink all of the wine.”

Say your ice cream truck cost $30,000 brand new. After a five year recovery period, you’ve completely written it off. Doing some market research, you find you can sell your five year old ice cream truck for about $12,000—that’s the salvage value. So the truck’s book value is now $12,000.

Ready to file your taxes? Learn how to report depreciation, one step at a time, with our guide to Form 4562.