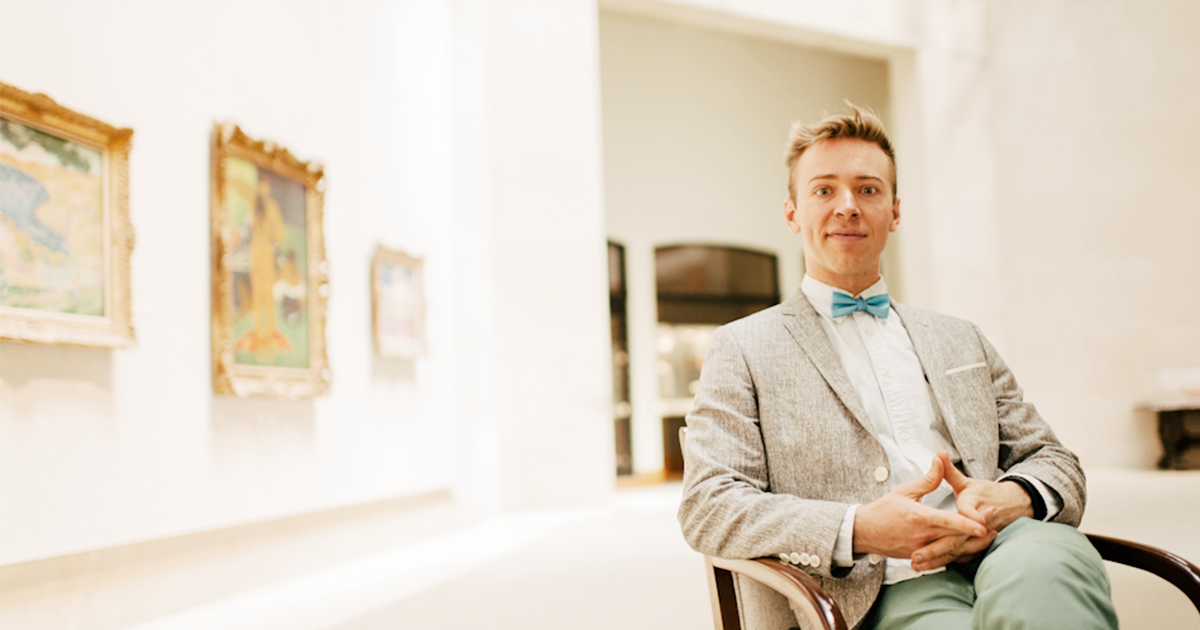 Years ago, Nick Gray wasn’t a fan of museums. In fact he rarely went, hating the feeling that he was not only bored—but that he didn’t belong. Raised in what he calls the “suburbs of America,” Nick had no early exposure to the arts, nor was his family the museum-going type. And with a job in high-tech sales and a business degree under his belt, the arts simply weren’t on his radar.

But a move to New York City and a date at the Met changed all that.

“I went on a date with a woman who took me on a tour of her favorite exhibits,” Nick recalls. “Her enthusiasm for the artwork unlocked the museum for me. I felt as if there was this whole place in New York City, this whole museum that I can go to whenever I want. It made me very curious about art and history. So the Metropolitan Museum of Art could become my space for learning and knowledge.”

The experience sparked Nick’s thirst for art, and he religiously returned to the Met every weekend. Soon he began looping in his friends (who started telling their friends) and offering tours of his own. Inspired by his date’s unconventional method, Nick would cherry-pick his favorite exhibits and explain, show-and-tell-style, what made them stand out. And then:

“One day, [the now-defunct lifestyle blog] Daily Candy wrote us up—they’d heard about us through word of mouth—and the next day, a thousand people emailed to ask if they could join my tours. At that point, I was like, holy cow, this is a big deal.”

The write-up helped Nick realize the magnitude of what he was doing: making art accessible to people who might not otherwise visit museums, much less enjoy a museum tour. Thanks to his previous disdain for, and recently newfound love of museums, he had a natural knack for helping others appreciate art in ways not offered by the standard-issue, docent-led tours.

It was then, too, that Nick realized his passion project was more than just a hobby. It took a dedicated year of working full-time, conducting museum tours on weekends, and saving relentlessly, to launch Museum Hack and turn it into a full-time gig.

Nick’s ability to foster the idea and quickly turn it into a fully realized business may have something to do with the entrepreneurial training he received during his formative years. As a young boy, Nick and his father sold BluBlocker sunglasses at weekend state fairs. In middle school, he sold baseball cards. In high school, he started a web hosting company that helped him pay for college. In college, he imported and sold computer speakers to students at a premium.

Today, Nick’s zest for business and fearlessness in the face of trialling new ways of doing things is evident throughout all aspects of Museum Hack.

A Museum Hack tour, for example, is anything but conventional. While a standard museum tour will take a big group through a specific wing or exhibition, Nick’s tours focus not only on what people see during the tours, but how people feel during the experience.

“When you go on a tour with us, it’s incredibly fast-paced,” Nick says. “You’ll see two to three times as many objects as you would on a normal tour. For $59, we’ll show an intimate group [typically, six to eight people] 10, 15, sometimes 20 pieces in different parts of the museum over the course of two hours. We mix it up with a bunch of games to keep the attention level high. We’ll pass out candy, maybe tip back an espresso or wine. We encourage social interaction. We give away prizes at the end of the tour. It’s completely different than a regular museum experience.”

Museum Hack guests are guided by some of the best storytellers around, gregarious, animated types who interweave lively, humorous, sometimes even salacious anecdotes about artefacts throughout the tours. The underlying aim is to ensure visitors have fun while connecting with the art. This storytelling aspect is the secret sauce that’s kept the business robust since its inception, and attracted the attention of corporate clients who’ve since hired Museum Hack for employee engagement and trainings.

And the company’s renegade style of recruiting tour guides is far from standard. The call for applicants starts with a request for a resumé and cover letter, before asking candidates to share what makes them unique in 140 characters or less. “It won’t guarantee anyone a job,” admits Nick, “but the natural-born storytellers and those with raw talent stand out.” The ones who do are invited to essentially live-audition their storytelling skills at a museum, with real Museum Hack customers, so that Nick can get a feel for how they’d perform on the job, a process that even Nick himself admits is “intense.”

“Just like our business, our hiring process is very non-traditional,” he says, “and it’s something we take pride in.”

Although Nick goes to great lengths to be respectful of the museum space, the art, and registration rules for large groups, most museums didn’t take kindly to Museum Hack at first. The institutions gradually came around to seeing the upside of having Nick’s groups on site when they realized they were getting exposure to a younger, hungrier clientele that they previously struggled to attract. The fact that museums receive a third of Museum Hack’s $59 ticket price per visitor (which includes the customer’s admission ticket to the museum) also helped to soothe relations.

Still, Nick admits there’s a way to go before every establishment on his target list becomes a convert. Despite Museum Hack’s ongoing rise in popularity, some museums continue to view the company as a threat—an issue Nick works to diffuse by highlighting the ways in which he can supplement and expand their current offerings. He adds that several partnerships with various museums are underway (akin to how the company is partnering with larger corporate clients on their training modules), and museums around the world are hiring Museum Hack to help with young member programs and audience development to reach millennials.

Looking back, Nick says he wouldn’t have changed any part of his process in growing Museum Hack to what it is today—bumps, bruises, and all—and that “perfection is the enemy of done,” advice given to him in the early stages of his career that he also offers to other entrepreneurs regardless of their fields.

“There’s a lot of pressure to develop a perfect thing, or to only do a tour, for example, when it’s 100% perfect, and you know all the facts to a T—but we just like to throw it out there and revise as we go as needed.”

“It’s the same for our marketing and how we hire and train people. Too many entrepreneurs spend a lot of time preparing for takeoff. And when they do that, they’re not interacting with the market.”

Ultimately, Museum Hack isn’t simply about tours, or even art: it’s about connection. From customers to employees, even the museums themselves, Nick’s dedication to engaging and connecting people through experience and making them feel something in the process is a work of art unto itself.